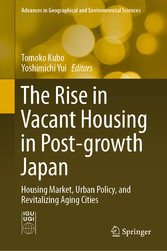 This book explores how Japanese cities have transformed since the 1950s by describing housing and urban planning policies, urbanization processes, and maps with GIS analysis. It also discusses how housing vacancies have increased in shrinking Japanese cities, with case studies in Tokyo, Kyoto, Hiroshima, and Utsunomiya, and examines public-private partnerships and civil engagement to revitalize cities. Providing examples of how Japanese cities have addressed the issues of aging populations and urban shrinkage, it contributes to better decision-making by politicians, planners, local authorities, NPOs, and local communities in many rapidly urbanizing and potentially aging regions such as Asia.
In the era of urban shrinkage, Japanese cities have struggled with aging populations, low fertility, population loss, and a decline in the economic base over decades. In particular, shrinkage in metropolitan suburbs and large cities (e.g., sites of prefectural government with 300 000-400 000 inhabitants) has caused serious social problems owing to the huge aging population and large areas covered. One typical problem that has emerged is an increase in vacancies in now empty and abandoned housing.

Tomoko Kubo is an Assistant Professor at the Faculty of Life and Environmental Sciences of the University of Tsukuba, Japan. She is an urban geographer working in the field of housing studies. She is currently the Chair of the Urban Geography Commission's Young Scholar (YS) Committee of the International Geographical Union (IGU) after winning its 2012 YS Paper competition, and a board member of the Research Committee on Housing and the Built Environment (RC43) of the International Sociological Association (ISA). Her research interests include urbanization and the housing market, urban and housing policy, residential choices under socioeconomic changes, single women's homeownership, shrinking cities and their revitalization, and aging suburbs in Japan.
Yoshimichi Yui is a Professor at the Graduate School of Education of Hiroshima University, Japan. He is currently a board member of the UNESCO Associated School Project University Network. His research interests include housing studies in geography, urban geography, aging, town planning, welfare, gender, childcare, revitalizing housing estates, and geography education.