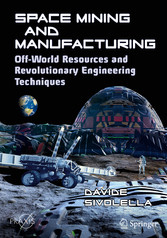 This book produces convincing evidence that exploiting the potential of space could help solve many environmental and social issues affecting our planet, such as pollution, overcrowding, resource depletion and conflicts, economic inequality, social unrest, economic instability and unemployment. It also touches on the legal problems that will be encountered with the implementation of the new technologies and new laws that will need to be enacted and new organizations that will need to be formed to deal with these changes.
This proposition for a space economy is not science fiction, but well within the remit of current or under development technologies. Numerous technologies are described and put together to form a coherent and feasible road map that, if implemented, could lead humankind towards a brighter future.


Davide Sivolella is an aerospace engineer living and working in the UK as a specialist in the design of aircraft structural repairs of civil airliners. Currently, he is employed by British Airways at London Heathrow Airport. As a child, Davide has developed a fascination with all kinds of flying machines, especially those which travel above the atmosphere. In fact, this passion for astronautics led to a bachelor's and master's degrees in Aerospace Engineering from the Polytechnic of Turin (Italy). Being born in July 1981, just a few months after the Columbia's maiden flight, he developed a fondness for the Space Shuttle program. Eventually, this has resulted in Springer-Praxis publishing in August 2013 his first book, To Orbit and Back Again: How the Space Shuttle Flew in Space. The book has been praised for its content on numerous outlets ever since. A sequel, entitled The Space Shuttle Program: Technologies and Accomplishments is currently scheduled for release at the beginning of July 2017.

Davide's interest for space exploration is not limited to the Space Shuttle program. In recent years, he has researched how space exploration can foster a practical solution to help ease some of the most excruciating problems affecting Earth and humankind, such as environmental pollution, overcrowding, resource depletion, conflicts for scarce resource control, economic inequality, social unrest, economic instability, job displacement and unemployment. On a number of occasions, Jeff Bezos, Amazon and Blue Origin's founder, has stated that he envisions a future where the manufacturing industry will be moved into space exploiting the resources of the Solar System. Davide's research has convinced him that this vision is indeed feasible and capable of delivering a large amount of benefits that current plans for exploration of Mars or the Moon cannot match.