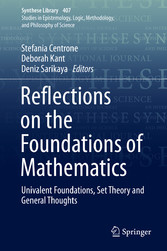 Reflections on the Foundations of Mathematics - Univalent Foundations, Set Theory and General Thoughts

Reflections on the Foundations of Mathematics - Univalent Foundations, Set Theory and General Thoughts

Stefania Centrone is currently Privatdozentin at the University of Hamburg and was deputy Professor of Theoretical Philosophy at the Georg-August-Universität Göttingen. In 2012 she was awarded a DFG-Eigene Stelle for the project Bolzanos und Husserls Weiterentwicklung von Leibnizens Ideen zur Mathesis Universalis at the Carl-von-Ossietzky University of Oldenburg. She is author/editor, among others, of the volume Logic and philosophy of Mathematics in the Early Husserl (Springer 2010) and Studien zu Bolzano (Academia Verlag 2015).
Deborah Kant studied mathematics at Free University and Humboldt University in Berlin, and specialized in set theory and logic. At the DMV Students' Conference 2015 in Hamburg, her talk about her master's thesis 'Cardinal Sequences in ZFC' was being awarded. Since 2015, she is a PhD student at the Humboldt University Berlin under the supervision of Karl-Georg Niebergall with a project on naturalness in set theory.