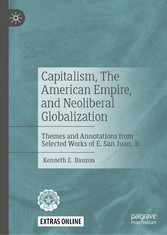 This book looks at facets in the history of capitalism from the Enlightenment period, through the emergence of the American Empire in the Pacific, and to the contemporary era of neoliberal globalization. This re-telling of history is done by drawing from the works of E. San Juan, Jr. (henceforth, San Juan), considered arguably one of the great contemporary cultural and literary critics of our time. In this author's view, San Juan's lifetime of works offer a living documentation of, among others, the history and thought of the modern world highlighted by the rise of capitalism through the contemporary era of neoliberal globalization, and shepherded to its hegemonic status by what stands today as the preeminent empire of the United States. The book underscores the symbiosis between contemporary capitalism as an economic system based on accumulation on the one hand, and the American imperial state on the other, just as it revisits the colonial project that was carried out in capitalism's wake, the violence and subjugation inflicted on its victims, and how this colonial project has morphed into a new form of colonialism (or neocolonialism) maintained and enforced through the rules and institutional mechanisms of what is popularly known as neoliberal globalization that also provides the ideological and  legal rationale for the commodification and the ultimate grab of the global commons reminiscent of the classical, albeit cruder, form of colonialism.


Kenneth E. Bauzon, with a doctorate in Political Science from Duke University, in Durham, North Carolina, is currently Professor of Political Science at Saint Joseph's College in New York, USA. He has also taught in a visiting capacity at various institutions including Old Dominion University in Norfolk, Virginia, Lafayette College in Easton, Pennsylvania, Yeshiva University in New York City, and Tsukuba University in Tsukuba, Japan. He has received research and travel awards most notably a multi-year grant from the Japan Ministry of Education (Monbusho) as a member of a multidisciplinary project on comparative multiculturalism in the United States, Canada, Japan, and Australia; and, as a Fulbright Fellow to Egypt and Israel.