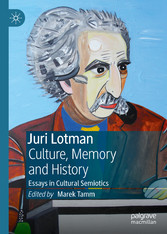 This volume brings together a selection of Juri Lotman's late essays, published between 1979 and 1995. While Lotman is widely read in the fields of semiotics and literary studies, his innovative ideas about history and memory remain relatively unknown. The articles in this volume, most of which are appearing in English for the first time, lay out Lotman's semiotic model of culture, with its emphasis on mnemonic processes. Lotman's concept of culture as the non-hereditary memory of a community that is in a continuous process of self-interpretation will be of interest to scholars working in cultural theory, memory studies and the theory of history.


Juri Lotman (1922-1993), the Russian-Estonian literary scholar and semiotician, was one of the most original and important cultural theorists of the twentieth century, the founder of the well-known Tartu-Moscow School of Semiotics, and the initiator of the discipline of cultural semiotics. His works translated into English include Universe of the Mind: A Semiotic Theory of Culture (1990), Culture and Explosion (2009), The Unpredictable Workings of Culture (2013), and Non-Memoirs (2014).
Marek Tamm is Professor of Cultural History at the School of Humanities in Tallinn University, Estonia. He is the co-editor of Rethinking Historical Time: New Approaches to Presentism (2019) and Debating New Approaches to History (2018), and editor of Afterlife of Events: Perspectives on Mnemohistory (2015).
Brian James Baer is Professor of Russian and Translation Studies at Kent State University, USA. He is the author of Translation and the Making of Modern Russian Literature (2016) and the translator of Juri Lotman's final monograph, The Unpredictable Workings of Culture (2013).