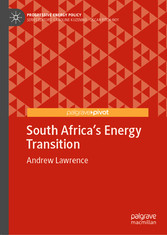 This book provides a succinct overview of the evolution of policies addressing energy and climate justice in South Africa. Drawing on a range of analytical perspectives, including socio-technical studies, just transitions, and critical political economy, it explains why South Africa's energy transition from a coal-dependent, centralised power generation and distribution system has been so slow, and reveals the types of socio-political inequalities that persist across regimes and energy sources. Topics explored include critical approaches to the South African state and its state-owned energy provider, Eskom; the political ecologies of coal and water; the politics of non-renewable energy alternatives; as well as the trajectory and fate of the Renewable Energy Independent Power Producers Procurement Programme (REIPPPP), the country's major renewable energy policy. The book concludes with reflections on alternative, neglected energy and development paths, suggesting how the political economy of South Africa's energy system could be further transformed for the better.

Andrew Lawrence is a research fellow at Wits School of Governance, South Africa and Visiting Professor at Vienna School of International Studies, Austria. He has written extensively on South Africa and the comparative and global political economy of energy. Publications include Employer and Worker Collective Action: A Comparative Study of Germany, South Africa, and the United States (2014).