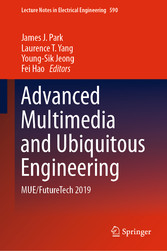 This book presents the combined proceedings of the 13th International Conference on Multimedia and Ubiquitous Engineering (MUE 2019) and the 14th International Conference on Future Information Technology (Future Tech 2019), both held in Xi'an, China, April 24 - 26, 2019.
The aim of these two meetings was to promote discussion and interaction among academics, researchers and professionals in the field of ubiquitous computing technologies.
These proceedings reflect the state of the art in the development of computational methods, involving theory, algorithms, numerical simulation, error and uncertainty analysis and novel applications of new processing techniques in engineering, science, and other disciplines related to ubiquitous computing.


James J. Park received Ph.D. degrees in Graduate School of Information Security from Korea University, Korea and Graduate School of Human Sciences from Waseda University, Japan. From December, 2002 to July, 2007, Dr. Park had been a research scientist of R&D Institute, Hanwha S&C Co., Ltd., Korea. From September, 2007 to August, 2009, He had been a professor at the Department of Computer Science and Engineering, Kyungnam University, Korea. He is now a professor at the Department of Computer Science and Engineering and Department of Interdisciplinary Bio IT Materials, Seoul National University of Science and Technology (SeoulTech), Korea. Dr. Park has published about 200 research papers in international journals and conferences. He has been serving as chair, program committee, or organizing committee chair for many international conferences and workshops. He is a steering chair of international conferences - MUE, FutureTech, CSA, CUTE, UCAWSN, World IT Congress-Jeju. He is editor-in-chief of Human-centric Computing and Information Sciences (HCIS) by Springer, The Journal of Information Processing Systems (JIPS) by KIPS, and Journal of Convergence (JoC) by KIPS CSWRG. He is Associate Editor / Editor of 14 international journals including JoS, JNCA, SCN, CJ, and so on. In addition, he has been serving as a Guest Editor for international journals by some publishers: Springer, Elsevier, John Wiley, Oxford Univ. press, Emerald, Inderscience, MDPI. He got the best paper awards from ISA-08 and ITCS-11 conferences and the outstanding leadership awards from IEEE HPCC-09, ICA3PP-10, IEE ISPA-11, PDCAT-11, IEEE AINA-15. Furthermore, he got the outstanding research awards from the SeoulTech, 2014. His research interests include IoT, Human-centric Ubiquitous Computing, Information Security, Digital Forensics, Vehicular Cloud Computing, Multimedia Computing, etc. He is a member of the IEEE, IEEE Computer Society, KIPS, and KMMS.

Young-Sik Jeong is a professor in the Department of Multimedia Engineering at Dongguk University in Korea. His research interests include multimedia cloud computing, information security of cloud computing, mobile computing, IoT(Internet of Things), and wireless sensor network applications. He received his B.S. degree in Mathematics and his M.S. and Ph.D. degrees in Computer Science and Engineering from Korea University in Seoul, Korea in 1987, 1989, and 1993, respectively. He was a professor in the Department of Computer Engineering at Wonkwang University in Korea from 1993 to 2012. He worked and researched to Michigan State University and Wayne State University as visiting professor in 1997 and 2004 respectively. Since 2002, he has been serving as an IEC/TC 100 Korean Technical Committee member, as the IEC/TC 108 Chairman of Korean Technical Committee, and as an ISO/IEC JTC1 SC25 Korean Technical Committee member. Also He is an EiC(Editor-in-Chief) of Journal of Information Processing Systems, an associate editor of JoS(Journal of Supercomputing), IJCS(international Journal of Communication Systems) and an editor of JIT(Journal of Internet Technology), finally an associate editor of Journal of Human-centric Computing(HCIS) and so on. He is also a member of the IEEE.

Fei Hao received the B.Sc. degree in Information and Computing Science and the M.Sc. degree in Computer Software and Theory from Xihua University, China, in 2005 and 2008, respectively, and the Ph.D. degree in Computer Science and Engineering from Soonchunhyang University, South Korea, in 2016. He is currently an associate professor with the School of Computer Science, Shaanxi Normal University, China. He has authored over 80 papers in international journals and conferences. He received five best paper awards from KISM 2012, GreenCom 2013, MUE 2015, UCAWSN 2015 and CUTE 2016. He is a recipient of the IEEE Outstanding Service Award at DSS2018, SmartData 2017, IEEE Outstanding Leadership Award at CPSCom 2013 and the 2015 Chinese Government Award for Outstanding Self-Financed Students Abroad. His research interests include social computing, ubiquitous computing, big data analysis and processing and mobile cloud computing.