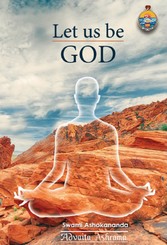 Let Us Be God

Let Us Be God

The author, Swami Ashokananda, a disciple of Swami Vivekananda, is renowned for his thought-provoking lectures and articles on Vedanta philosophy and its practical application in daily life as taught by his master. The Swami's tenure as the Editor of the Prabuddha Bharata, an English monthly of the Ramakrishna Order, from 1927-1930 was a memorable one. Later on as the Minister-in-charge of the Vedanta Society of Northern California, San Francisco from 1932 until his passing away in 1969, the Swami was one of the guiding forces for the Vedanta Movement in the West.

This book published by Advaita Ashrama, a publication house of Ramakrishna Math, Belur Math, borrows its title from an inspired utterance of Swami Vivekananda which forms the subject of the Swami's deliberations presented herein as the first lecture. By his forceful lectures based on deep reasoning, the Swami turns our attention to the Divine within.

The lectures and articles included here were earlier published in the Prabuddha Bharata and the Vedanta Kesari, another English monthly of the Ramakrishna Order. They are intended for all sincere spiritual aspirants, irrespective of caste, creed, or gender, who strive to transform their daily lives through the invigorating tonic of Advaita Vedanta.